I couldn’t join GGJ this year due to other engagements, but I did have time for the 91st onehourgamejam!

The theme was the same as GGJ: waves (although an optional second theme was later added). I immediately decided to try to make a tower defence-type game as I’ve never done that before and it could be fun and interesting.

I spent quite a bit of time drawing, so at the end of the hour, all I had was a jumping princess in a prison! I figured it’s better to take whatever time I need to finish the game rather than submit an incomplete game, so in the end, I spent about 3 hours on “Invaders”, a tower defence game with a single tower type :) 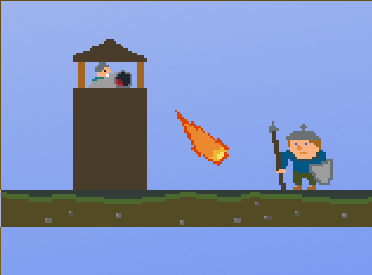 So - what was good and what could have been better?

I’m happy that the game gets harder and that the tower-placing gameplay actually makes a difference. In hindsight I should have made wave #2 send two and two invaders together, so that there’s a difference from the first wave.

Recently, I’ve been trying to be stricter about submitting on the hour of the 1hgj; however I feel it made more sense (to myself) to take some extra time and finish the game this time.